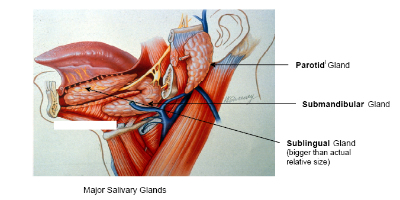 In addition to the major salivary glands there are thousands of minor salivary glands present throughout the lips, mouth and throat. Approximately 1 to 1.5 litres of saliva is produced per day. Saliva is 90% water, but also contains proteins that both aid digestion, and keep the mouth and teeth healthy.

Salivary gland enlargement may occur because of:

Obstruction to the duct of one of the glands.

This may be due to either a stone or a narrowing of the duct. Gland swelling typically occurs during eating and is painful. The swelling is caused by saliva build up in the obstructed gland and this can become infected. Stones are most common in the submandibular gland, but occasionally occur in the parotid.

These are most common in the parotid gland. 80% are benign (not cancers) and typically present as a slowly growing salivary mass. The risk of a salivary lump being malignant is higher for submandibular tumours (50% are cancers), and most tumours occurring in the minor salivary glands are malignant but these are rare.

Factors suggesting that a salivary lesion may be malignant include:

The most common benign parotid tumour is a Pleomorphic Adenoma which is solid. The second most common benign lesion is a Warthins Tumour which is cystic (Cyst-adenoma), and most commonly found in the inferior portion of the parotid. They present as a firm but mobile mass but they can become quite large if left untreated. The majority (80-90% of parotid tumours) occur in the superficial aspect of the gland (superficial to the facial nerve) because 80-90% of the gland is superficial to the nerve. In 10-20% of cases, however, tumours occur in the deep part of the gland, and such lesions can even present as a lump in the throat with expansion of an area called the parapharyngeal space at the back of the mouth. In this latter setting the lump may be visible by looking inside the mouth. Benign salivary gland tumours only rarely cause facial weakness, a finding that is virtually diagnostic of malignancy, however pleomorphic adenomas have a risk of malignant change over a long period of time. 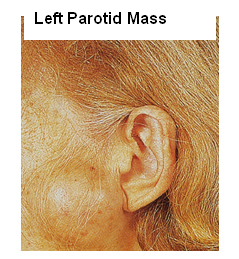 The most common malignant tumour (70+%) of the parotid gland in New Zealand occurs as a result of involvement of the lymph glands present in the parotid by either a Squamous Cell Cancer (SCC) or melanoma (MM) of skin of the face or scalp. There may be a past history of a previous skin cancer (SCC or MM) but in a small percentage of patients there is no known previous skin cancer.

These are highly aggressive tumours that often also spread to lymph nodes in the neck. These tumours can involve the facial nerve causing facial weakness. The mass feels hard and irregular and can be fixed to deep structures and/or invade the overlying skin causing discolouration or ulceration. They may be palpable lymph nodes in the neck most frequently in the upper deep cervical region (level II) immediately below the parotid. See "Neck Dissection" in this website for classification of neck levels Primary parotid cancers are rare. As with the more common metastatic SCC or Melanoma cancers they are usually hard and irregular, can involve adjacent structures or skin and can result in facial nerve invasion and facial muscle weakness. c. Submandibular Tumours

50% of these are malignant. The mass is below the jaw. If malignant, they can invade adjacent structures and cause facial weakness and abnormalities in tongue function. If malignant, there again may be associated with enlarged lymph nodes, most commonly at levels I and II (see " Neck Dissection" for classification of neck levels).

These are rare and virtually all are malignant. They are most common in the palate. The most common type is an adenoid cystic cancer which has a tendency to invade along nerves and has a high incidence of local recurrence irrespective of the treatment employed.

Fluid is aspirated through a very fine needle, which is placed in the lesion. The cells in the fluid are then examined under the microscope to give an indication of what the lesion is. FNA is mainly used to differentiate benign from malignant tumours, and may be employed in the evaluation of either salivary gland lumps or adjacent enlarged lymph nodes. This is often the single most important investigation. However it is only 80%-90% accurate and results must be interpreted hand-in-hand with the clinical findings.

Ultrasound is useful in the diagnosis of many parotid lesions and submandibular gland lesions. It can help differentiate whether a lesion is within a salivary gland or next to the gland, and whether a lesion is cystic or solid. CT scanning may be appropriate for large parotid lesions, if there is suspicion there is a deep extension, or if the tumour is malignant. Sialography involves injecting radiological dye into a salivary gland duct and taking X-rays of the duct system. It is not useful for investigation of tumours but is useful in evaluating recurrent gland swelling where there is no obvious stone where either a small stone or stricture is suspected. Plain X-ray may be useful to evaluate suspected stones in the salivary gland and the best X-ray view is often obtained with a "panorex" view. 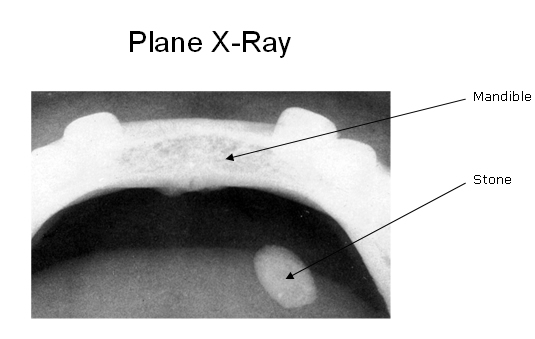 Surgical resection is required for all salivary tumours. Clearly all cancers require resection, and benign tumours will continue to grow if left untreated.

This operation is performed under general anaesthetic. An incision is made in front of the ear and extended down behind the angle of the jaw and then down for a short distance into the neck. See below: 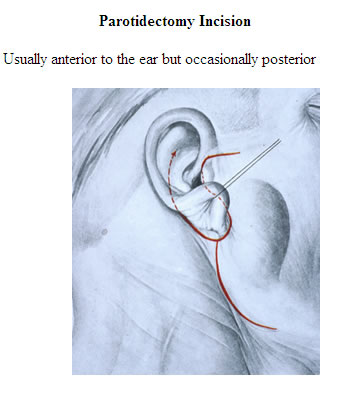 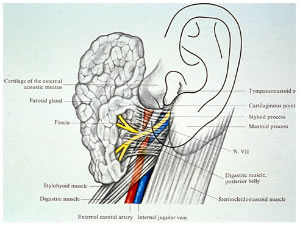 See Fig below showing branches of facial nerve supplying muscles of the face (Branches are shown A-E and these are Temporal, Zygomatic, Buccal, Maxillary, Mandibular, and Cervical respectively) The great auricular nerve supplying sensation to the ear is also shown. This sensory nerve is often divided during parotidectomy and results in ear numbness. 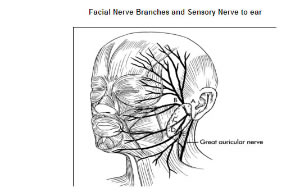 Fig below showing anatomy after removal of superficial parotid lobe.

Ear is R superior just above main trunk of nerve. Nerve branches are on left. 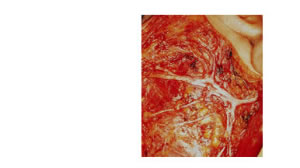 Post operatively one to two nights in hospital are required and normal activities can be resumed in one to two weeks.

This operation is performed under general anaesthetic. The incision is made in the neck about two finger breadths below the lower border of the jaw in a skin crease.

The gland is removed usually with a small portion of the duct. If there is a malignant tumour a wider excision may be required possibly along with dissection of regional lymph nodes (see Neck Dissection).

Excision of the Submandibular Calculi

The Marginal Branch of the Facial Nerve supplies muscle function to the lower lip is the nerve most at risk. Injury to this nerve is usually temporary.

Sensory nerves in the area may be injured resulting in numbness around the jaw or neck. This is usually temporary.

Bleeding Bleeding into the operative site may require a return to the operating theatre for removal of the clot and control of the bleeding point. Again this is a 1% risk.

Post operatively one to two nights in hospital are required and normal activities can be resumed in one to two weeks.

These occur in various sites including the lips, mouth, nose and throat. The surgery involves local resection of the tumour and whatever surrounding soft tissue or bone is involved in order to get a clear margin.

The most common problem with the sublingual gland is development of a mucous cyst called a Ranula. Treatment is usually simple excision through the mouth although more extensive Ranulas (Diving or Plunging Ranula) may also require a Neck incision. Sublingual cancers are rare and require wide excision +/- node dissection.

Most salivary gland cancers require adjuvant radiation in addition to surgery. This may be administered post surgery or less commonly prior to surgery. Radiotherapy usually lasts for 5-6 weeks.