Neck Dissection is an operation designed to remove groups of neck lymph nodes for treatment of cancer that has spread from a primary site elsewhere in the head and neck region.

Neck Nodes are divided into seven different levels. There are 5 levels in the lateral compartment and 2 in the central compartment. The 5 lateral levels are shown below 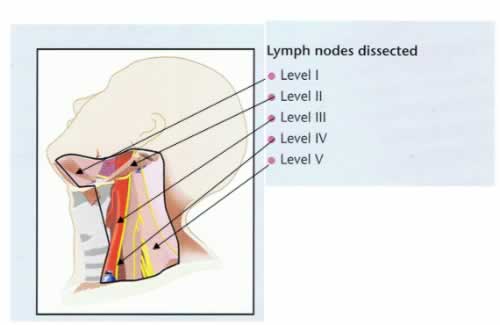 Outcome is affected by the number, size, and position of lymph nodes involved. Cancer also has the ability to grow beyond the confines of the lymph node capsule into surrounding tissues: this is known as extranodal spread (ENS) or extra-capsular spread (ECS) and it is a bad prognostic factor. Usually the larger the node the higher the chance of extra-nodal extension.

The types of Head and neck cancers that spread to neck lymph nodes include:

There are several types of Neck Dissection:

A comprehensive neck dissections involve removal of all five lateral lymph node levels (levels I-V) and is usually performed for clinically detectable neck metastases particularly if these are multiple or large nodes at several levels. A Radical Neck Dissection involves removal of lymph node from levels I-V, as well as the sterno-mastoid muscle, the internal jugular vein and the spinal accessory nerve. Radical neck dissection is largely of historic interest and has largely been replaced by the Modified neck dissection which involves sparing one or more of the above non lymph node structures. This can usually be done and usually means sparing the accessory nerve, the internal jugular vein and at least part of the sternocleidomastoid muscle. The results of conservative neck dissection are equivalent to the results for radical neck dissection but the morbidity is much less (complications of shoulder pain, neck swelling, and deformity)

During the 1980's it became apparent that recurrence rates were no different between selective dissections and more radical procedures but the morbidity of the “ selective” procedures was shown to be less.

Selective Neck Dissectionis the emerging as the procedure of choice for treating occult or early clinical neck metastases.

The incision is dependent upon which nodes are to be resected. For Levels 1-4, a ‘ hockey stick’ incision is usually made from the mastoid muscle extending down the neck and anteriorly. If parotid nodes also require dissection, this can be included as shown in Fig 1 below. For dissection of Levels 2-5, for example in the treatment of a posterior scalp melanoma with regional disease, an incision similar to Fig 2 below is required.

The incision is deepened to form flaps, important nerves are avoided and relevant nodes resected. Usually the internal jugular vein and sternomastoid muscle and the eleventh cranial nerve can be preserved but if they are involved by the cancer they also require resection. A drain is briefly required and hospital stay is usually 2-3 days.

NB: Although all of the above may occur, major and/or prolonged complications are unusual. Outcome is usually satisfactory and survival following such surgery is mainly dependent on the extent of the cancer at the time of treatment.