Melanoma is one of the least common types of skin cancer but because skin cancer is especially common in New Zealand melanoma is a frequently encountered problem. It begins in pigment cells in the skin called melanocytes at the junction of the epidermis (thin outer layer) of the skin and the dermis (the deeper layer of the skin). Before the dermis is invaded by the melanoma the lesion is called in-situ melanoma. After dermal invasion has occurred the lesion is an invasive melanoma with capacity to spread to other parts of the body.

Melanoma is a serious skin cancer, which can be cured if it is diagnosed early and treated when the tumour is thin and has not invaded deeply into the dermis of the skin. However, if a melanoma is not removed at an early stage, cancer cells may grow downward invading lymphatic and blood vessels resulting in a serious and possibly lethal clinical problem. Malignant melanoma is very common in New Zealand. Although Melanoma is much less common than basal or squamous cell cancer of the skin, the incidence is so high in New Zealand that for Caucasians the lifetime risk of developing melanoma is around 5%. The different types of melanoma include:

Superficial spreading melanoma. This is the most common subtype which begins with an initial outward or radial growth phase prior to vertical invasion

Lentigo malignant melanoma : This has a long radial growth phase and is most commonly seen in the head and neck region of older patients.

Nodular Melanoma: Poor prognosis due to deep or vertical invasive nature from the onset.

The typical history is of a changing skin lesion. If melanoma is suspected, the changing skin lesion should be removed (excisional biopsy) usually under local anaesthetic and sent to a laboratory for examination under a microscope (histology). This is almost always a 15 minute out-patient procedure performed with minimal pain and results take a few days to return from the laboratory. A biopsy is performed to confirm or refute the diagnosis of melanoma and to determine the thickness of the melanoma which will then determine the extent of treatment required.

The potential for metastatic spread is related to the depth of the melanocytic lesion from its epidermal origin. Clark's levels of invasion of malignant melanoma is where a pathologist determines how extensive the dermal invasion is:

Clark's Level I: in situ (confined to epidermis)

At least as important as level of dermal invasion is the measured thickness of the melanoma as determined by the pathologist. There is a steady increase in both the incidence of lymph gland involvement, and in mortality as a function of the primary thickness.See Figs 1a. & 1 b. Fig 1b is modified from Balch et al 2001. 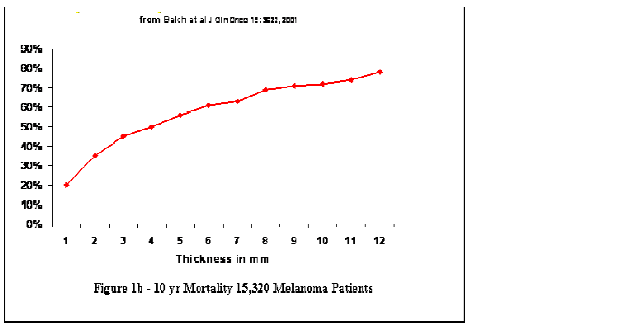 After diagnosis, a plan is developed to fit the specific needs of each individual patient. The extent of treatment for melanoma depends largely on the thickness of the lesion.

Surgery to widely remove (excise) a melanoma is the standard treatment. It is necessary to remove not only the tumour but also a margin of normal tissue around it in order to minimise the chance of recurrence.

What are "Lymph Nodes"?

Lymph nodes are the filters along the lymphatic system, the system that drains and filters fluid in tissues. They filter out and trap bacteria, v, cancer cells, and mount an immune response against them.

What is a Sentinel Lymph Node?

When malignant cells are released from a melanoma into the lymph system, they travel to one or two anatomically specific lymph nodes in the first instance. It is these nodes that are called thesentinel node(s).

The idea behind removing the sentinel node is that, instead of removing many lymph nodes and analysing all of them in the laboratory to determine whether the cancer has spread to lymph glands, only the sentinel lymph node(s) require removal. This technique initially developed by Dr Donald Morton at the "John Wayne Cancer Centre" in the USA is at least 90% accurate in diagnosing lymph gland involvement, and is now standard practice for managing melanomas thicker than 1 mm. See Fig 2. 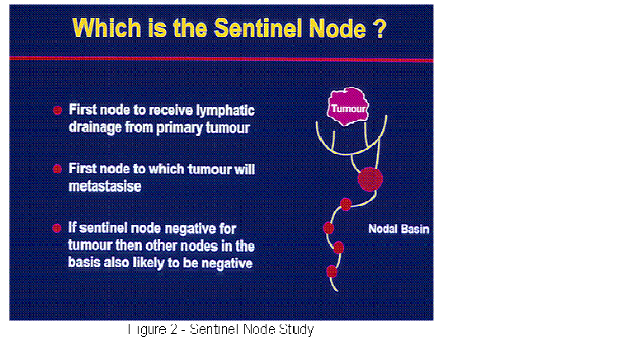 Firstly the site of the Sentinel Node is determined by injecting a small dose of a radio-active isotope into the primary site wound. The tracer then moves from the primary site to the lymph node that drains that particular area of skin, namely the sentinel node. The site is detected using a radiological isotopic scanner and marked.

Prior to surgery a blue dye is injected around the melanoma primary site which in turn drains along the lymphatic channels to the sentinel lymph node. Then, under General Anaethesia the blue node is identified and resected using a small incision. A sterile hand help radiation detector is also used to aid detection of the sentinel node.

The blue dye is a vegetable dye which is usually absorbed within six weeks. See Figs 3 and 4 below. 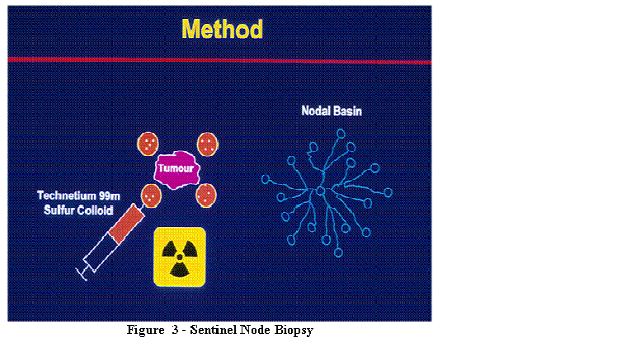 If the sentinel node study demonstates a lymph node or nodes involved with melanoma a node dissection is usually appropriate. In addition, for patients with palpable lymph nodes who have a past history of melanoma and the palpable node is shown by fine needle aspiaration (FNA) cytology to be involved with melanoma, node dissection is usually the treatment of choice.

1.Melanomas of the upper limb and upper trunk usually spread to the armpit (Axilla).

2.Melanomas of the scalp, face, and neck usually spread to lymph nodes in the parotid salivary gland and/or the lymph nodes along the internal jugular vein in the neck (see Neck dissection section of this website).

Resection of axillary nodes is similar to the operation performed for lymph node involvement or lymph node staging in breast cancer, and involves resection of all of the nodes below the main vein in the armpit (axilla) the axillary vein.

Resection of the lymph nodes of the neck depends on the site of the primary melanoma. For melanoma of the anterior face and scalp removal of the lymph nodes in the parotid salivary gland, along with the nodes in levels 1-4 is usually required . See Fig 5a below for levels, and Figs 5b and 5c for exposure to dissect the neck for anteriorly and posteriorly placed melanomas respectively. For melanomas of the posterior scalp and posterior neck removal of the nodes at levels 2-5 is usually required along with resection of the nodes behind and below the back of the ear (post-auricular and sub-occipital nodes). See Fig 5b and Fig 5c below. In addition melanomas arrising on the upper back and lower neck can spread to lymph nodes in the neck and to the axilla (armpit) 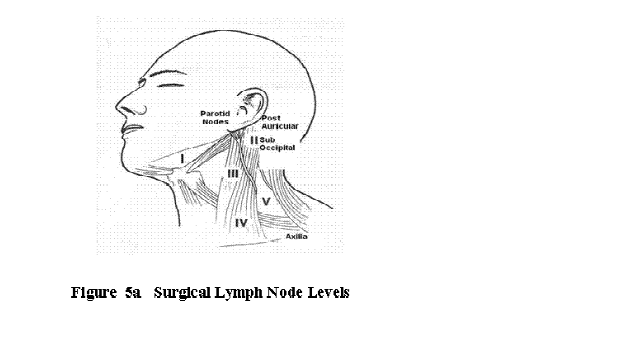 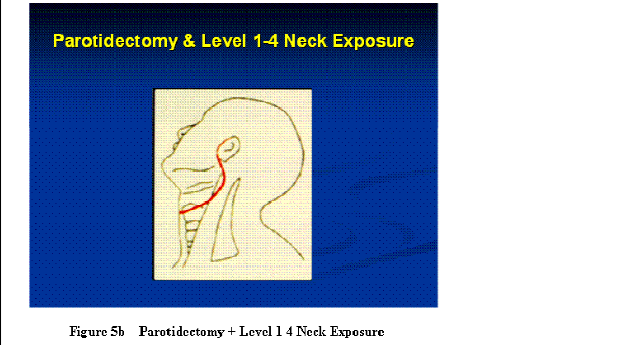 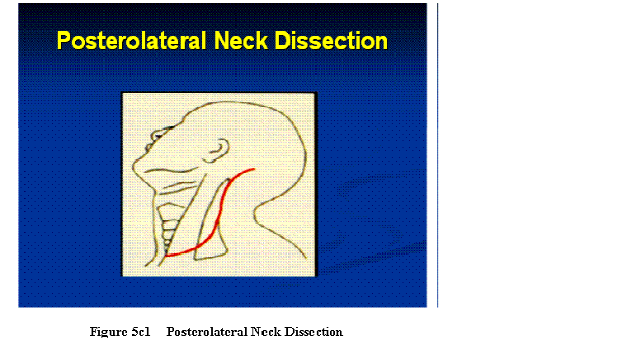 Following node dissection in the arm-pit or groin radiotherapy is usually not required post-operatively unless there is spread of the melanoma outside of the capsule of the involved nodes into suppounding structures (extra-capsular spread). In contrast following neck dissection for melanoma pos-operative melanoma is often required to minimise recurrence.

The Fig 6 below shows the decrease in recurrence following the use of post-operative radiotherapy in a study performed by the author in 508 patients with head & neck melanoma. N1 disease is only 1 node involved, N2 is 2 or 3 nodes involved, and N3 is 4 or more nodes involved.

-RT is without radiotherapy

+RT is with post-operative radiotherapy

Unfortunately, although post-operative radiotherapy decreases recurrence following neck dissection for melanoma this does not result in an increase in survival see Fig 7. 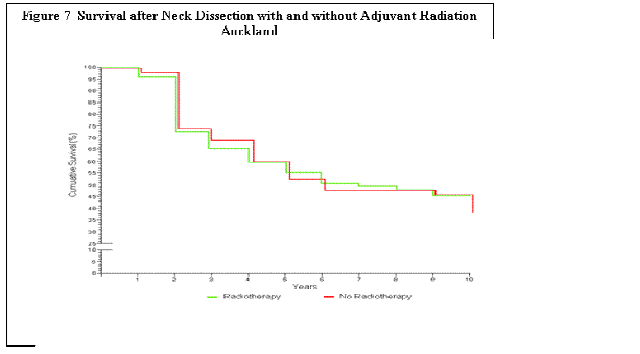 Figure 8 shows survival is influenced by the presence of involved lymph nodes (Regional disease) and the influence of the number of nodes involded.

Figure 9 demonstrates how the thickness of the primary melanoma influences survival. These data are based on the authors assessment of 508 cases of Head & Neck melanoma in Auckland: see publications. Although these data specifically apply to head & neck melanoma the implications of these data are also applicable to melanomas in other sites of the body. 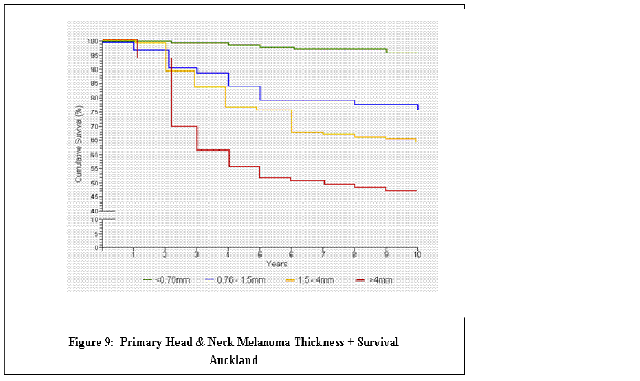